The Hague International Centre has been sorting expat registration and certificates for many years; however, now we are so much more and would love to show it to you – from the perspective of the people who work here, our partners and friends.

Upon entering the Spui municipality one may be overwhelmed by the size of the building and how it oddly seems even larger on the inside. This is an experience every expat will go through in the beginning of their stay in The Hague. Today, however, we are coming in with an intention to meet one of the most seasoned employees of the centre – Wilfred Assink.

“I’ve been with The Hague International Centre since 2011. I saw it change and grow from a single-company support office, to what it is today.” Wilfred’s passion for everything intercultural started back in high school, where he preferred language classes, and would seek out opportunities to engage in international experiences. “I can now speak English, German, some Spanish and French, in addition to Dutch” he tells, “and I always try to speak, or at least greet people in their language. It puts them at ease, pulls down barriers”.

Wilfred meets internationals not only in the office, but in his daily life too. In fact, most of his friends are not Dutch. “Funny”, Wilfred notes “how the Dutch are so accommodating of English language, that one of my friends, living in Netherlands for 11 years, doesn’t speak a word in Dutch.”

Talking of accommodating, it is exactly what pushed The Hague International Centre towards its new vision. “After registering, people would keep coming back to the centre for other questions, and, later on, to deregister too, even though at the time these services weren’t provided.” Wilfred soon realized the natural demand for expansion of service. Since then The Hague International Centre is becoming a central place for all internationals’ questions.

The questions brought up the most are related either to taxes or local legislation processes. “It is especially felt around March or April. People find it hard to navigate all the forms, especially since they appear on different databases, and many of them are still in Dutch.” The Hague International Centre is here to provide assistance with these questions, and in the future it will expand even further. “I imagine services like licence exchange and parking permits, among others.”

Before arriving to The Hague it is necessary to do the due homework - “Find out which certificates you have to bring, have an idea of where you’ll be living, as without a local address you won’t be able to register, research how to open a bank account.” Wilfred mentions an occurring situation, when people arrive and rent at an Airbnb or short stays, only to later realize, that there is no registration possibility, leading to lost time and money, which is especially cumbersome when there are plenty of other things to attend to.

Living in The Hague

Meanwhile, if you’ve already settled down, Wilfred has an honest advice. “Open up” he tells, “to locals, their culture. This is a very important part of integration in order to really feel at home in a foreign country.” He suggests taking on activities you already love, but finding Dutch clubs for that, whether it be sports or other projects. “Even your colleagues will be a great point to start mingling with.”

Finally, Wilfred shares what makes The Hague so lovely to him: “I can go out and keep meeting people I know all the time. More than half a million people live here, but it doesn’t feel crowded at all. It is like a village in that sense.”

Would you like to learn more about the Dutch, Dutch customs and what it is like to live in The Hague region? Visit our next Welcome to The Hague event on June 6! 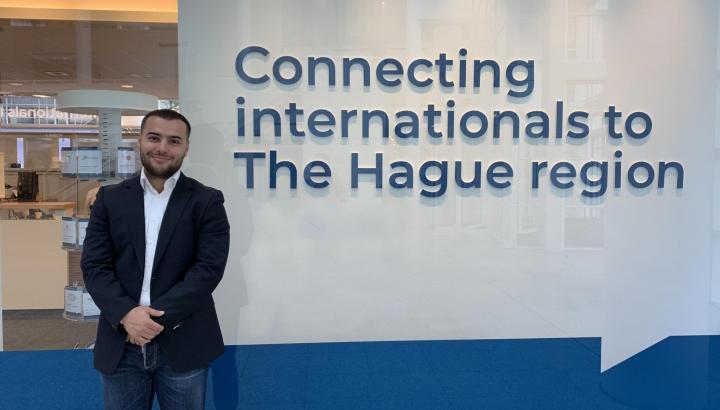 19/07/2019
Let's meet Nabile!
Nabile is not even in his thirties, but his ambition and devotion during the two and a half years with The Hague International Centre advanced his career from the front office up to an account mana