Towards a greener living in The Hague

Towards a greener living in The Hague

The Netherlands has a reputation of a truly sustainable country, with its green fields, windmills and cyclists on every turn. Truth is, although The Hague is one of the world's leaders in climate neutral approach, we are still a long way from ideal sustainability regarding energy production or CO2 emissions. The Municipality of The Hague is working hard to become a CO2-neutral city by 2030, and The Climate Plan outlines the city’s main spearheads for reaching this goal. The city is taking a collaborative approach to meeting this aim, with a cross-stakeholder approach, working with housing corporations, NGOs, industry, regional and national government.

Nonetheless, we do perform remarkably well in our care for the environment. Circular economy is becoming an intricate part of daily Dutch lives, and recycling takes a prime position.

Recycling in The Hague

Becoming sustainable is a long process, and is best approached with consistency. You can contribute to the greener city by seperating your waste (such as organic waste, glass, paper, plastic, tin and drinkcartons, textiles, domestic chemical waste, electric appliances)  and using relevant bins and containers to dispose of it. Some neighbourhoods have colour coded recycling bins that are collected according to the waste collection calendar.  Others use underground containers, which you can use any day. On this map you can see where the containers are located in your neighbourhood. In addition the Municipality will place so called ‘waste sorting streets’ in every neighbourhood in the city. A ‘waste sorting street’ is a collection of containers in one central location where inhabitants can easily dispose of  their plastic, glass, paper and textiles. There are currently 20 ‘waste sorting streets’ in the Hague. From Autumn 2019,  Segbroek, Laak, Scheveningen and Haagse Hout will also join the group. Be thoughtful of your neighbours and use these only between 7AM and 10PM (8PM for glass).

Your used frying oil and even stale bread can be disposed separately in City Farms, which you’ll find sprinkled all around the city. Similarly to organic waste, these will be recycled either into compost or energy. Energy produced in such manner amount to more than a tenth of all sustainable energy used in the Netherlands.

If sustainability is far from the first priority on your mind, you should still be very thorough with the way you dispose of waste – it is not too difficult to confuse the right day of collection, and not knowing that leaving the trash ‘by’ the container as opposed to the ‘inside’ of it, will, in all likelihood, net a sizeable fine - even if the container was entirely full. Furthermore, people new to the Netherlands are often not aware that, without a prior arrangement, one is not supposed to leave oversized waste, e. g. sofas, cupboards, washing machine etc. outside or by the containers. You can take them to one of the recycling stations or make an appointment for them to be collected from home.

What else can I do?

Consider purchasing as little plastic-packaged products as possible. Separate your waste with care – incorrectly separated waste contaminates the recycling cycle  and significantly increases recycling costs. Initiate recycling around you – at home and at your workplace, if it is not done yet. Finally, participate in various events and spread awareness on sustainable living! After all, as Anne-Marie Bonneau at Zero Waste Chef said “We don’t need a handful of people doing zero waste perfectly. We need millions of people doing it imperfectly”.

Here you’ll find a few initiatives and campaigns, maybe there’s a right one for you!

If you look on Facebook, you will surely find some clean-up activities taking place in The Hague and surrounding areas. Not to say you shouldn’t initiate one, if you can’t find any.

The Hague is Wecycle campaign

Come up with a great recycling idea for old electric appliances and turn them in at a garbage and recycling station. The 25 most fun or striking entries will be rewarded with a Wecycle sponsor cheque for € 1,000 for your sports club or for a local charity of your choice. This campaign will be held from 29 April to 9 June 2019:

A car sharing scheme means you don’t have exclusive use of a car, but you share it with other people. Many residents of The Hague are already sharing a car or are using a shared car.

The largest ocean clean-up initiative in the world, initiated in Delft, crowdfunded for over $2.2 million in 2014, becoming the most successful non-profit crowdfunding campaign to date.

You can get rid of old items by turning them in during The Hague clean-up relay (Haagse Opruimdagen). Items which can still be used will go to the second-hand stores and oversized waste will be disposed of properly. 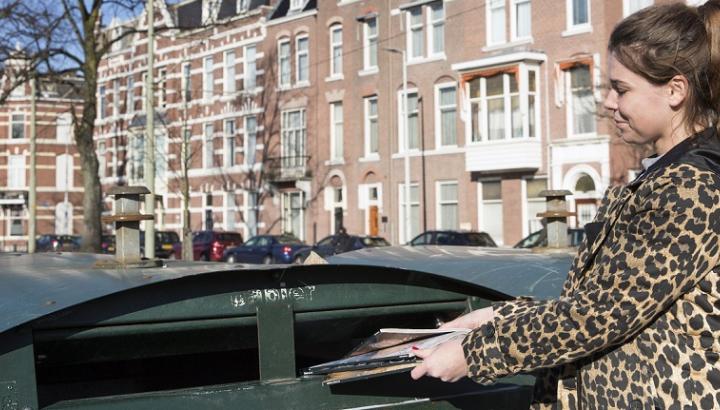 Recycling and waste disposal
As a new international in The Hague, one might feel overwhelmed by all the policies and regulations regarding household waste disposal, but the sustainable habits are easy to adopt. The Dutch take