100 years of promoting Hispanic culture in The Hague

100 years of promoting Hispanic culture in The Hague

In 2020, The Hispanic Association of The Hague ‘Asociación Hispánica de La Haya’ (ASOHA) celebrated their 100th anniversary. We took this opportunity to speak with Edith Bergansius, Chair of ASOHA, about their contribution to the Spanish-speaking community in The Hague.

Edith was the youngest member when she joined the association (then known as  the Hispanic Society of The Hague) in 1971. After many years of serving the association in various roles, she took on the honorary role of Chair in 2006. She is incredibly knowledgeable on the history of the association and can regale you with stories of Hispanic luminaries she has met and worked with since her passion for the Spanish culture brought her to Madrid as a young girl of 18. With her background in diplomacy, and her connection with the Spanish community, Edith organised numerous cultural events that helped promote Hispanic culture in The Hague. Her love for the culture is still evident now, in the way she shared her stories during this interview.

What can you tell our readers about ASOHA?

The ‘Asociación Hispánica de La Haya’ is a group of people who share a common interest for the Spanish language and culture. Anyone is welcome to join – as long as you can understand Spanish, as most of our activities are organised in Spanish. You pay a small annual fee to join, and our members consist of expats from Spain and Latin America, and locals who have an interest or relationship with Spanish and Hispanic culture.

What does ASOHA do for the Spanish-speaking community in The Hague?

ASOHA organises film screenings, lectures, readings, meet-ups, and other activities to promote the Spanish language and Hispanic culture. We collaborate with Spanish-speaking Embassies to promote their cultural highlights. And we share a newsletter about Hispanic culture and news, but also updates and important information in The Hague for the non-Dutch speaking members.

Are you organising any covid-proof activities (online) for the Spanish speaking community at the moment?

We just held an online talk in March about Rafael Altamira who was the first Spanish judge in The Hague 100 years ago. We do not have anything else planned for this year, but last year, we were able to organise 12 covid proof in-person activities including two cocktail parties at a Peruvian restaurant. We are hoping to organise more events when the coronavirus measures are lifted. And we look forward to celebrating our centennial when the circumstances allow.

Would you like to join a Spanish-speaking community? Here is a list of groups and initiatives you can find in the Netherlands: 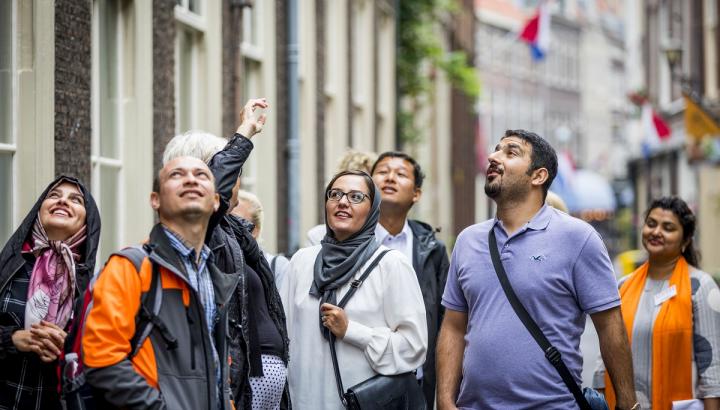